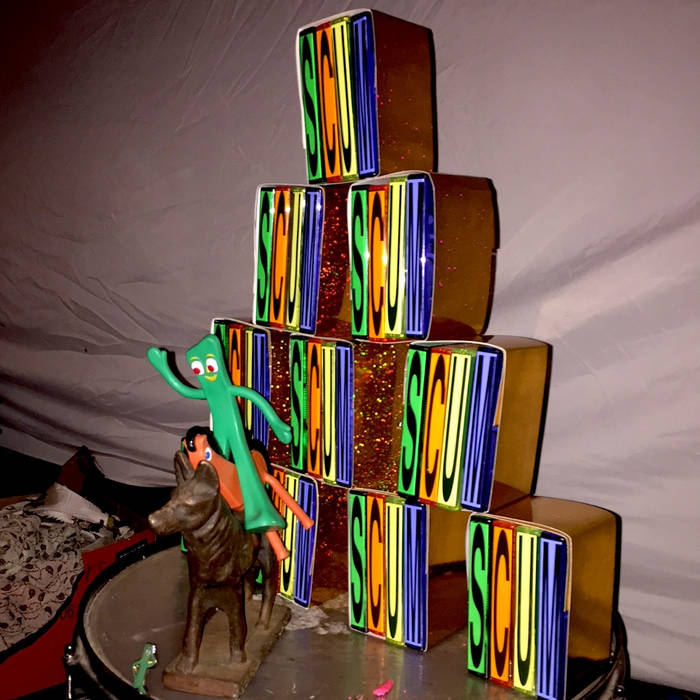 This is SCUM's second release. It was recorded at various times over the span of time. The album was released as a four pack of cassette tapes each approximately a half hour in length. The first 2 tapes contain an album recorded in one day, it differed from previous material as it contains casio keyboard drums, bass guitar and multi tracking. The remaining tapes are filled with recordings from live shows, sessions from the basement at the Marmion Center For the Arts (now demolished) which the band lived at and hosted many events at. Each tape has a different color case which represents the Gumby team, Green for Gumby, Orange for Pokey, Yellow for Prickle and Blue for Goo. The tapes were bound in a gold sparkle paper and fastened with a safety pin. Only 10 copies of the album were made. Much of the songs on the first 2 tapes were never performed live. SCUM held a small release party at Kathy's Place which the band lived at and would host avant garde and DIY movies at, due to these events over 45 noise complaints were issued, Kathy's Place is now defunct but at the time was run by ....... who is know the notorious media mogul know currently as Lumier Lightsmith. If you are interested in a remaining copy of the album please get in contact with SCUM. Additionally if you are interested in helping to release this material to a wider audience through more physical copies please contact SCUM.

Bandcamp Daily  your guide to the world of Bandcamp